On October 23, the Chinese ruler, Xi Jinping, asked the Central Committee of the Communist Party to support him and his team of loyalists to rule the country for the next five years. He had no trouble getting their support. But the next day he had much more trouble with the highly decentralized committee that is the global financial market.

Foreign investors have spectacularly dumped Chinese stocks and its currency. Hong Kong’s Hang Seng stock index, dominated by mainland companies, fell more than 6%. The sale was even worse in New York. The Golden Dragon index of Chinese companies listed on the tech-heavy Nasdaq, including giants like Alibaba and Baidu, fell 20% at one point, reaching a level last seen before Xi came to power a decade ago. . The offshore yuan, which fluctuates more freely than its onshore counterpart, weakened to its lowest value against the dollar since the market began in 2010 (see chart). 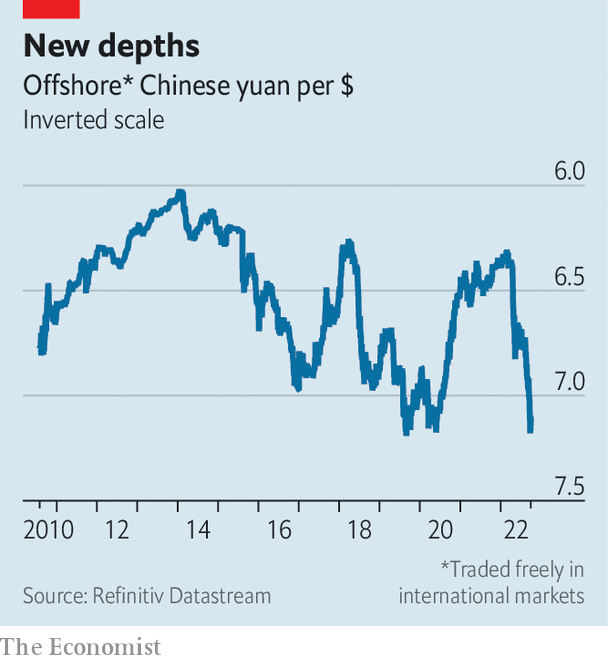 Mr Xi’s third term as leader was no surprise. But he disappointed investors with his choices for the party’s new Politburo and its powerful seven-member Standing Committee. Investors had hoped that these agencies would include market-friendly officials recognized for their prowess, not just their loyalty. When China’s financial markets plummeted in March, investors were reassured by reassuring words from Liu He, a member of the Politburo and a respected economic authority. No one of his stature could pronounce the same lines today. The upper echelons of China’s Communist Party lack people whose expertise and experience can curb Mr Xi’s economic instincts.

These instincts have become more apparent over time. For example, the word “security” appeared 91 times in Mr Xi’s report to the party congress on Oct. 16. Xi is determined to strengthen China against the US strategy of economic containment. He seems less interested in keeping foreign companies happy so that they will speak out against this strategy in their home countries. Faced with “external attempts to blackmail, contain, block and exert maximum pressure on China,” he said, “we have shown a fighting spirit and determination never to give in to coercion.”

Mr Xi’s calls for “common prosperity” are also troubling foreign investors. His goal of increasing wealth and reducing inequality has both an economic and a social justification. Increasing the share of national income paid to workers could help rebalance China’s economy away from investment to consumption. Increasing labor’s slice of the pie is indeed one of the indicators the IMF is tracking on its rebalancing scorecard for China. But investors fear new taxes on wealth or capital gains. And ‘common prosperity’ has been linked to a clumsiness against some of China’s most successful tech companies.

Xi has shown little interest in reducing the role of state-owned companies to give private companies more room to thrive. Instead of urging the state to withdraw, he wants the party to move forward. “Partitioning will … be ramped up” in private companies, he said in his report to Congress. Colin Hawes of the University of Technology Sydney has argued that, for the most part, private companies have successfully co-opted the party organizations within them. These organizations are often led by the boss of the company. Their members know that it is the company and not the party that pays their salaries. However, there is no guarantee that this modus vivendi will last, especially in some of the larger companies favored by foreign investors.

According to investment strategists at JPMorgan Chase, China’s faltering markets have become “decoupled” from improving fundamentals. Economic data from October 24 shows that China’s GDP grew by 3.9% in the third quarter compared to a year earlier. The figure, which came out later than planned, was also faster than expected. Like all Chinese data, it was received with skepticism. But it didn’t clearly conflict with several less notable indicators, such as electricity production, which grew more than 6% over the same period.

For a more expert analysis of the biggest stories in economics, finance, and markets, sign up for Money Talks, our weekly subscriber newsletter.