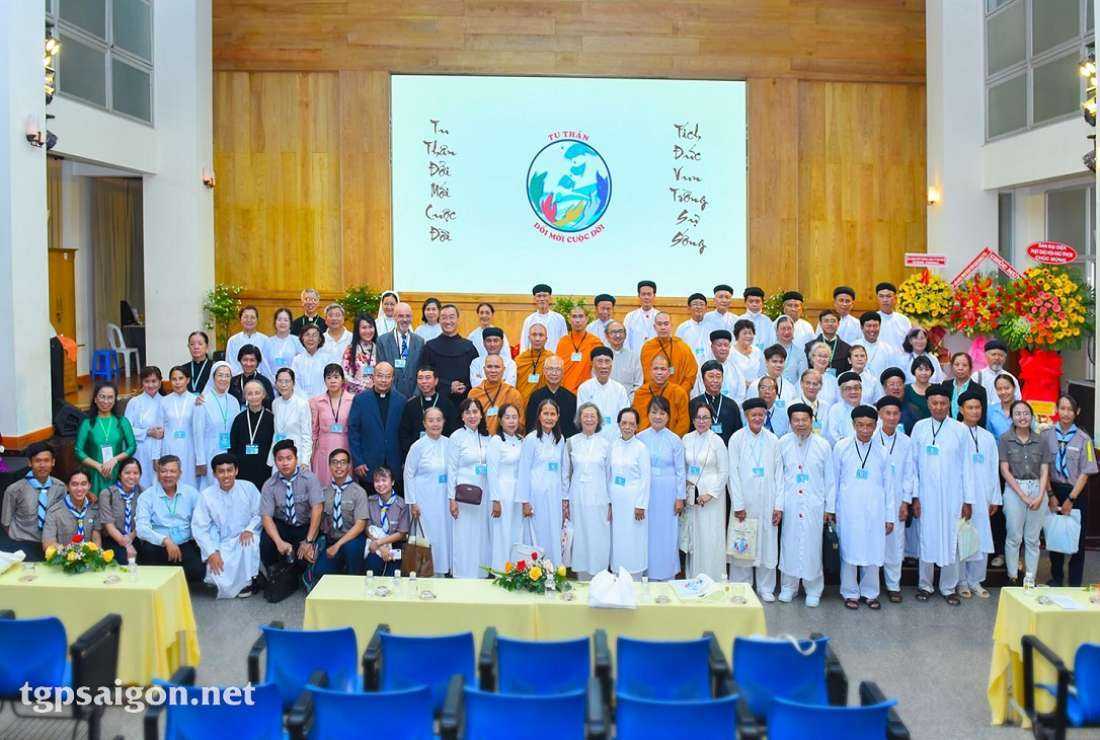 Representatives of different faiths pose for a photo during the interfaith gathering in the Archdiocese of Ho Chi Minh City on Oct. 27. (Photo included)

Representatives of different religions in South Vietnam recently gathered at their annual meeting to discuss approaches to self-improvement to build a better society.

Hundreds of dignitaries, scholars, nuns, monks and followers of Bahá’í, Buddhism, Catholicism, Islam, Protestantism and the indigenous religions of Cao Dai, Hoa Hao and Minh Ly attended the interfaith gathering at the Pastoral Center of the Archdiocese of Ho Chi Minh City on October 27.

The meeting with the theme “Improving ourselves to renew our lives” also marked the 200th birthday of Nguyen Dinh Chieu (1822-88), a great poet and cultural celebrity honored by UNESCO. His poems and other works convey humanity, nurture moral and traditional values, and praise people who work for the common good.

Bishop Peter Nguyen Van Kham of My Tho noted that self-improvement is considered a primary focus of religious life and said it was helpful for followers of the different local religions to have the opportunity to meet, listen to and develop their own ways of self-improvement that help enrich their traditions.

Bishop Kham said that improving yourself means making yourself better and nicer to approach the Good, the Truth and the Beautiful and contribute to the betterment of society.

The prelate said religions can help their members live virtuous lives and build a healthier, more humane and liveable society.

Thich Minh Lien of a local Buddhist institute said Buddhists are taught how to improve themselves by avoiding murder, theft, indecency, lying and drinking, which are basic standards for people to bring happiness to themselves, their families and society.

Father Peter Joseph Mary Ha Thien Truc, pastor of St. Martin parish, said his father is a follower of Cao Dai, his mother a Buddhist and he became a Catholic.

Father Truc said he used to work as a doctor and had a girlfriend, but he left everything after finding his priestly calling to absolutely live the gospel values ​​and bring happiness to other people. He entered St. Joseph Major Seminary in 2003 and was ordained a priest six years later.

He sanctifies his life by performing the Ten Commandments, the Beatitudes, and following the examples of Jesus, Mother Mary, and St. Joseph.

At the annual meeting first held in 2009 by the Ministry of Interfaith Dialogue Committee of the Archdiocese of Ho Chi Minh City, attendees watched cultural performances by Catholics, Buddhists and Cao Dai adherents.

They also prayed for peace and justice in the country and around the world, and sang the peace prayer of St. Francis of Assisi.