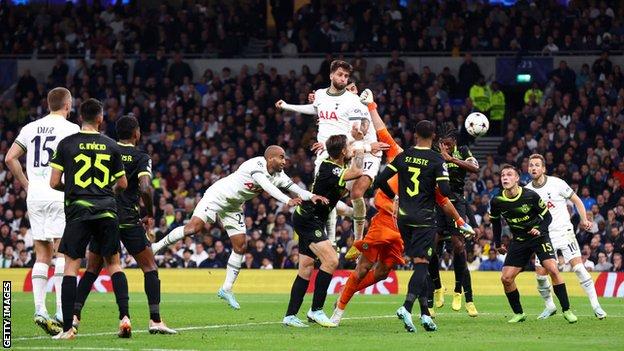 Tottenham will need at least a draw at Marseille in their final group stage match in the Champions League to secure a place in the knockout stage after being denied victory in a dramatic final against Sporting Lisbon.

Spurs knew a win would guarantee a place in the last 16, but they toiled for long periods before being denied a last gasp winner when Harry Kane’s strike was ruled out for offside and manager Antonio Conte was shown a red card in the ensuing chaos.

In a tense encounter, former Spurs youngster Marcus Edwards gave Sporting a deserved 22-minute lead with a nice low shot, as they penalized Conte’s side for a poor first half that caused loud cheers from the home fans.

The Spurs had improved greatly after the break, but they were grateful for a crucial save by keeper Hugo Lloris from Sporting substitute Flavio Nazinho, who also missed the goal.

They took advantage of those two breakaways as Rodrigo Bentancur got up 10 minutes before time to go home from a corner – and in a frantic closing, both sides had chances to win.

Kane thought he snatched it with pretty much the final kick – only for the VAR to decide otherwise.

Spurs regretted the VAR intervention that denied them the win, but they must also regret another slow start that allowed Sporting to take control for the first 45 minutes.

The increasingly rebellious mood at Tottenham Hotspur Stadium was reflected in the angry response from supporters who had been frustrated by a series of aimless and misplaced passes accompanied by a lack of urgency.

It was all so different after the break when the Spurs came alive, finally putting pressure on Sporting and forcing keeper Antonio Adan into action.

However, they still looked vulnerable and Lloris – rightly criticized for his mistakes in Sunday’s home defeat to Newcastle United – came to the rescue with Nazinho’s crucial save, although the Sporting attacker should not have made a mistake with a second chance that he steered wide from an open target.

The Spurs, who had returned to the game, had chances to take the three points that would have made the trip to Marseille a formality, but Eric Dier and Bentancur were unable to find the target.

The match ended in a melee, with Conte being sent off after lavishly celebrating what he believed was the goal that secured the knockout spot when Kane took the knockdown of Emerson Royal.

The Spurs have work to do in Marseille and they must learn the lesson that they will be punished for leaving too late to get into gear.

It was perhaps inevitable that Marcus Edwards would score on his return to Spurs, the club where he failed to break through despite his talent.

Fulfilling his potential in Lisbon, the 23-year-old put in a fine performance in the first group match, which Sporting won 2-0, with another promising play here.

He was a constant threat until he sank after half time, threatening several times in the first half and giving Sporting the lead with a low short drill past Lloris, while Spurs paid the price for holding up.

Edwards is now determined to capture his attitude to ability and will have impressed all observers, and those who remember him from his unfulfilled Spurs career, with how he performed here.

Player of the match

OBJECTIVE CONVINCED BY VAR: Harry Kane (Tottenham Hotspur) scores, but the goal is disallowed after a VAR review.

Missed attempt. Pedro Porro (Sporting Lisbon) right footed shot from outside the box is too high. Assisted by Manuel Ugarte.

Missed attempt. Rodrigo Bentancur (Tottenham Hotspur) right footed shot from the center of the box is too high. Assisted by Bryan Gil.

Attempt saved. Issahaku Fatawu (Sporting Lisbon) left footed shot from outside the box is saved to the bottom left corner.

Pedro Porro (Sporting Lisbon) wins a free kick in the defensive half.

Missed attempt. Eric Dier (Tottenham Hotspur) header from very close range misses to the left. On a pass from Son Heung-Min with a pass from a dead game moment.