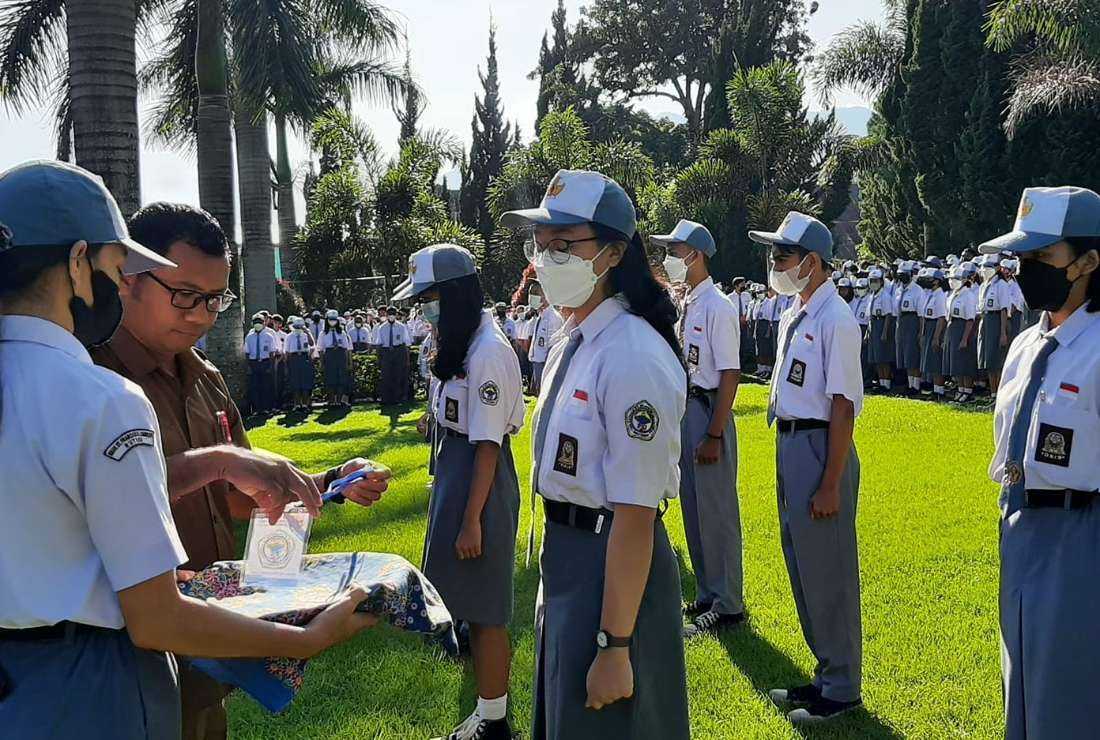 Aprilia Inka Prasasti made history when she became the first Muslim to be elected president of the Intra-School Student Organization (OSIS) at St. Francis Xavier Senior High School of Ruteng on the Indonesian island of Flores with a Catholic majority.

Inka (16) is one of only four Muslim students in the church-run school under Ruteng Diocese, founded in 1987. In the student elections on October 5, she defeated five candidates, all Catholics. She received support from both students and teachers.

Achmad Nurcholish of the Indonesian Conference on Religion and Peace said the Catholic students who sincerely accepted the victory of a Muslim student had shown a mature attitude.

“This is a good example of our diversity, of being able to live with different siblings,” he said.

Father Martin William, the school’s principal, said Inka’s victory was a “rebuke” against the existing practice that “glorifies religion and overrides rationality” in electing leaders.

He said his school fully supports all students who are elected because the most important thing is “leadership ability, namely having good intellect and character”.

Fransiska Widyawati, a lecturer at the Indonesian Catholic University of St. Paul in Ruteng, said Inka’s victory was an important message to break with the tendency to “search for one’s own religious group.”

However, in education, she said, “many minority students are victims of bullying,” which was a concern.

Inka’s election has been widely acclaimed, but examples of discrimination against non-Muslim students in various public schools are common in Indonesia.

In August, the nationalist Indonesian Democratic Struggle Party in Jakarta, which opened a hotline on discrimination and intolerance in schools, reported at least 10 cases of intolerance in Jakarta’s schools.

On October 19, the deputy principal and three other teachers of Public Senior High School 52 in the capital Jakarta are said to have blocked a non-Muslim student from running for election to the student council.

In a taped conversation with teachers, the deputy director said “don’t let non-Muslim students be candidates”.

A similar case also occurred at 58 Public Senior High School in Jakarta in August. A teacher shared a message via the school’s WhatsApp group asking Muslim students to be careful in choosing the two non-Muslim candidates in the battle, “because we must choose candidates who share our faith.”

Last month, Christian students at a public school in Depok, West Java province, were banned from using the classrooms for faith-building activities, forcing them to do so in the school hallways.

In the message to colleagues, the student said, “let this be a lesson… in the future.”

Some schools even force non-Muslim students to wear Muslim clothing, such as the hijab, behave like Muslims, starting from greeting to saying the prayers.

In 2021, a non-Muslim student at 2 2 Padang Public Vocational School, in West Sumatra province, was forced to change schools after a teacher allegedly asked her to wear a hijab.

Bonar Tigor Naipospos, vice president of the Setara Institute for Democracy and Peace, said such cases are clear evidence of creeping intolerance in educational institutions.

“This is the result of conservative ideas that are constantly promoted by certain groups who believe that school-age children will be an important factor in the future,” he said.

These groups are not only invading existing schools, both public and private, but are even establishing their own, Naipospos added.

In 2020, the Ministry of Education, Culture, Research and Technology named bigotry as one of the top three bottlenecks in educational institutions, alongside sexual violence and bullying.

The position justifies the government to take strong action against cases of intolerance. In proven cases of bigotry, the local Education Office imposes sanctions on teachers and principals of public schools.

Naipospos said that in addition to such measures, what should be done in school is to teach students to reason and to question ideas that are incompatible with diversity.

“Education about Pancasila (the secular state ideology) in classrooms should not just be memorized, but complemented by critical discussion and practice,” he said.

Meanwhile, Father William said that although Catholics are the majority at St. Francis Xavier Senior High School in Ruteng, they offer students of other faiths the opportunity to lead prayers every Monday according to their beliefs.

Every Friday, he said, teaching and learning activities end at noon to give Muslim students a chance to worship.

This can ward off the germs of radicalism and intolerance, the priest believes.

Inka appreciated that the open environment of the school gives her confidence.

“The open attitude of the school community makes me feel comfortable and confident,” she said. “Essentially, all religions are the same, that is, they teach the goodness of life,” she said.