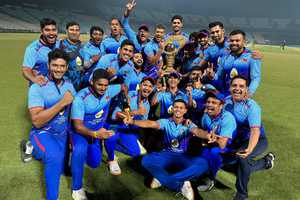 Sarfaraz Khan saved Mumbai from a tricky position and propelled the side to their first Syed Mushtaq Ali Trophy with a three-wicket win over Himachal at Eden Gardens on Saturday. The righthanded batter went undefeated on a 31-ball 36 to help the flank over the line with three balls left.

Himachal, who was set to bat, struggled against Mohit Awasthi’s swing and lost two early wickets. Prashant Chopra and Nikhil Gangta brought a brief revival, but that was quickly undone by Tanush Kotian’s triple attack in the middle overs. Akash Vasisth (25), Ekant Sen (37) and Mayank Dagar (21) provided much needed rebound in the late overs to help the squad recover from 58 to 6 in the 10th over to finish 143 to 8.

In response, Mumbai was dented in the chase early on, with Rishi Dhawan being responsible for the sacking of Prithvi Shaw and Ajinkya Rahane from the power play. However, the in-form Shreyas Iyer cemented two valuable partnerships with Yashasvi Jaiswal and Sarfaraz to take Mumbai over a dominant position by the 14th. When he was fired for a 26-ball 34, shoving a short ball to the bowler, Mumbai only needed 48 runs in 40 balls.

However, a few tidy overs, bolstered by Vaibhav Arora’s double outburst in the 17th over – where he sacked Shivam Dube and Aman Khan, soon followed by the sacking of Shams Mulani – put Mumbai in a tricky position. With 25 runs needed off 14 balls, Sarfaraz, who previously struggled to accelerate, managed to get some lustful blows in the penultimate over, bringing the comparison to six runs from the last ball.

With four needed out of four, Tanush Kotian completed the formalities with a six over the fine leg fence.