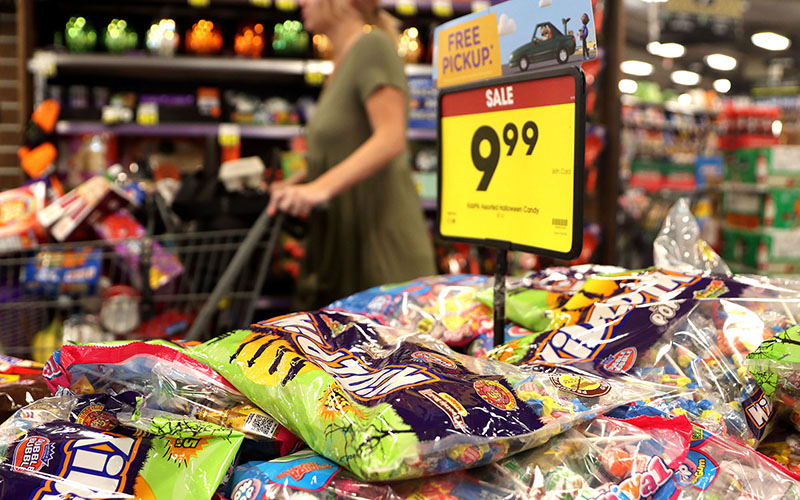 Shoppers walk past the Halloween candy show at Fry’s Food and Drug in Phoenix on Thursday. Candy is just one of the things people can expect to pay more for this Halloween. (Photo by Alexia Faith/Cronkite News) 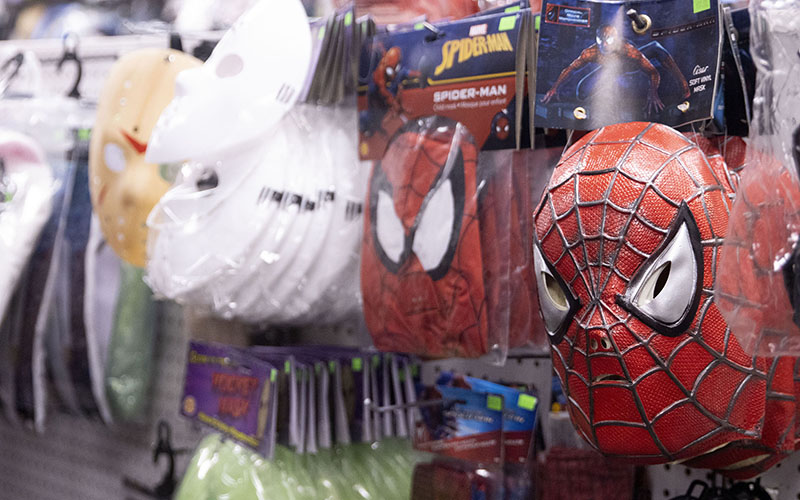 Spider-Man is one of the most popular costumes for kids this Halloween, according to a National Retail Federation, but that costume, like everything else related to the holiday this year, comes at a higher price. (Photo by Alexia Faith/Cronkite News) 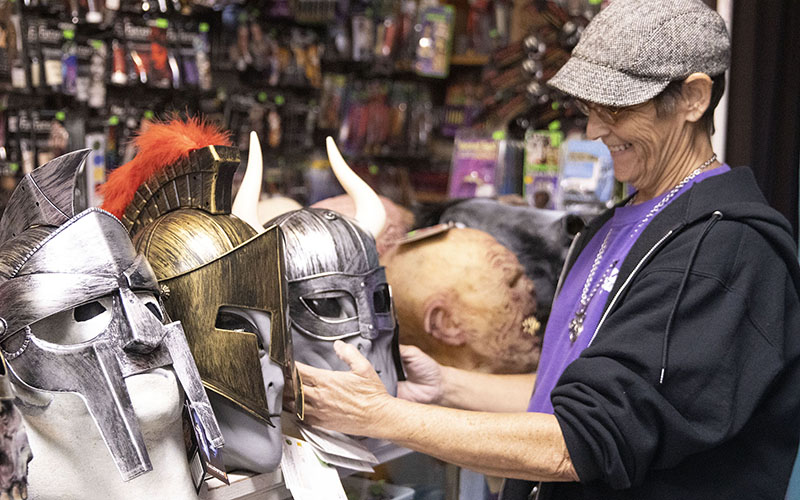 Char Calvert of Mesa has worked for the family business Fun Costumes in Mesa for the past 15 years. Store owner Angela Ott said she has seen wholesale prices for suits rise this year while quality has fallen. (Photo by Alexia Faith/Cronkite News)

WASHINGTON – The only thing scarier than ghosts, ghouls, and goblins this Halloween might be soaring prices for candy, costumes, and pumpkins.

According to the Bureau of Labor Statistics, candy is up 13% from last year, and pumpkins were also about 13% more expensive in the Southwest in mid-October this year compared to last year, according to data from the U.S. Department of Agriculture.

While the BLS doesn’t track costume costs, it does say clothing costs are generally 5.5% higher than last year — and one costume store owner reports paying a lot more.

It’s not surprising given inflation across the economy, one expert said.

“Halloween is a unique event that happens once a year, but it’s not immune to the same inflationary pressures as the rest of the consumer economy,” said Garrick Taylor, executive vice president of the Arizona Chamber of Commerce and Industry.

Rising prices, coupled with a post-pandemic surge in interest in Halloween, is likely to push holiday sales to a record-breaking $10.6 billion this year, according to a National Retail Federation survey of 8,283 people.

The largest portion, $3.6 billion, will be spent on costumes, according to the NRF survey, which said an estimated $700 million of that will go toward pet costumes. 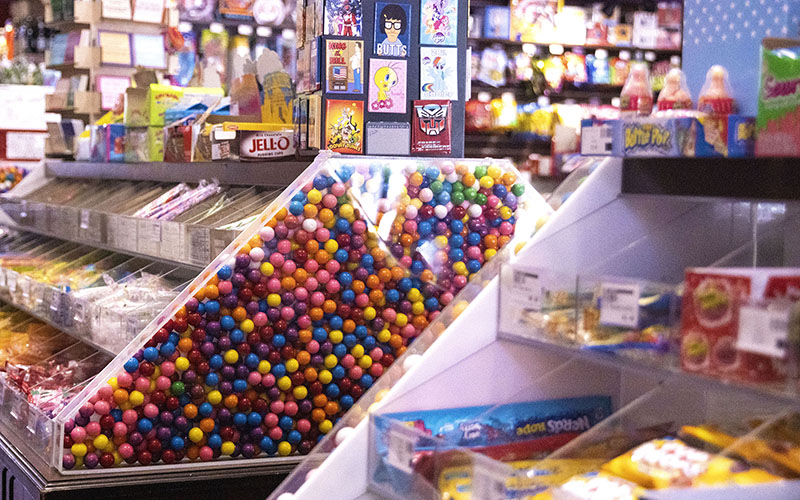 Reese Walford, the owner of Candy Addicts in Tempe, said he had to raise prices this year to cover the increased cost of his inventory. (Photo by Alexia Faith/Cronkite News)

“We’re not talking about nickels,” she said. “We’re talking costumes, somewhere between eight and ten dollars, which is my profit for my clients.”

The NRF survey said the most popular kids’ costumes this Halloween are Spider-Man, a princess, and a witch, while adults prefer witch, vampire, and ghost, in that order. For popular costumes like Spider-Man and other superheroes, Ott said prices can range from about $36 to $48 at her store.

Ott and other retailers said they needed to raise prices to keep up with the rise in costs. That’s what’s happening to Reese Walford, the owner of Candy Addicts in Tempe, who said he also had to raise prices to cover the increased cost of his inventory.

“We pay more for candy and we have to sell more to keep the same profit margin,” he said. But Walford hopes it won’t be for long. He joked that no one wants to pay a lot for candy.

“We want cheap candy,” he added.

Costs have risen for another Halloween staple, but at least two Arizona ranches said they’re holding the sale price of pumpkins this year.

Pumpkin prices have not risen at Mortimer Farms in Dewey and Apple Annie’s Orchard in Wilcox, despite higher costs for seeds, water, fertilizer and labor. Both farms were hesitant to raise pumpkin prices and chose to raise entrance fees, fruits and vegetables or other produce instead.

“Pumpkins are the one thing we haven’t raised our prices with,” said Ashlee Mortimer, chief marketing officer at Mortimer Farms. “We almost bite the bullet and say, ‘Okay, we’re not going to make money off pumpkins.'”

That was confirmed by Mandy Kirkendall, the manager and director of Fun at Apple Annie’s Orchard.

“We’ve had to raise some other prices,” Kirkendall said. “We’ve grown vegetables, pies and donuts.”

The NRF survey said that 69% of Americans plan to celebrate Halloween, up from 65% last year. The increase in attendance helps offset a slight drop in spending, with the average amount falling from $102.74 per person last year to $100.45 this year.

Price-conscious consumers who want the trick-or-treat without the sticker shock have options, if they get a little creative.

“One thing you can save on is making your own costume at home or going back to a sheet with cut holes,” said Lee McPheters, an economics professor at Arizona State University’s WP Carey School of Business.

Taylor said saving on candy can be as simple as buying the “generic candy corn over the brand candy bars.”

A sales analysis from Candystore.com showed that the top three candies in Arizona are Hershey Kisses, Hot Tamales and Snickers, while the top three nationally are Reese’s Cups, Skittles and M&Ms.

McPheters doesn’t think the high inflation will be enough to dampen people’s urge to go out and spend money before Halloween.

“Across the board in the economy, there is a sense that it is time to return to normal,” he said. “The stage is set for a thriving Halloween.”