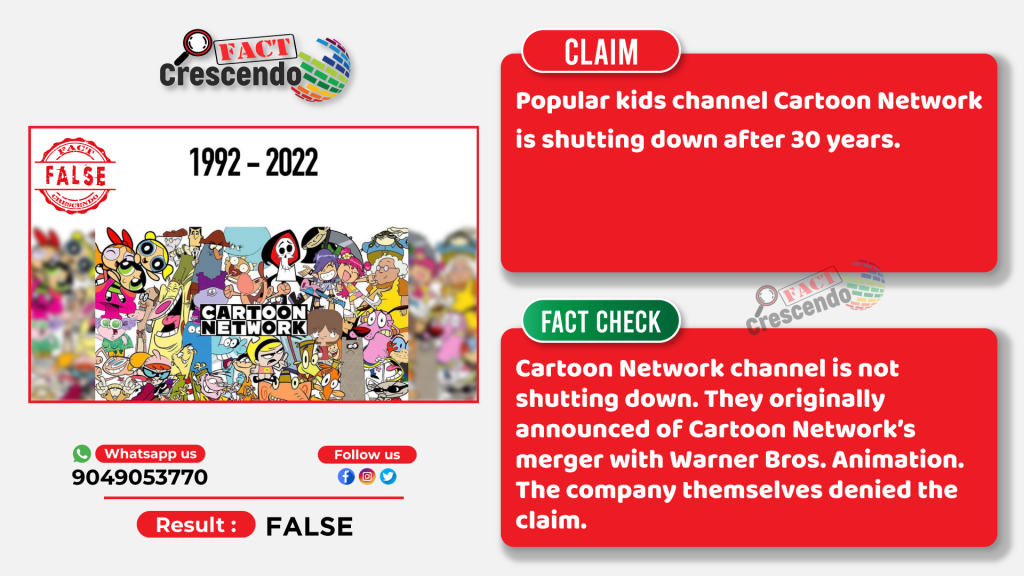 Cartoon Network is an American cable television channel owned by Warner Bros. Founded on October 1, 1992, Discovery is one of the oldest cartoon channels in existence.

We began our investigation by checking the official CN Networks Twitter account and found a tweet in which the company denies the viral claim that the channel is shutting down. The tweet reads: “You’re not dead, we’re just turning 30. To our fans, we’re not going anywhere. We are and always will be your home for beloved, innovative cartoons More coming soon!”

Collider, an American online entertainment platform, announced on October 12, 2022 that the network is merging with its sister studio to consolidate their animation divisions. While the studios are being merged, the labels will remain independent.

After the clarification from the CN Network, media outlets gave reports of the same Hindustan Times says: “According to ABC news, Warner Bros. Television Group (WBTVG) announced that about 26% of the staff, for a total of 125 positions, in scripted, unscripted and animation, were cut.On the other hand, Channing Dungey, CEO of Warner Bros. Television, said the merger between Cartoon Network and Warner Bros. could have more effects than their initial plan.Meanwhile, Cartoon Network’s latest update brought some relief for concerned fans.”

Fact Crescendo did not find the claim made along with the viral post to be true. Cartoon Network company has denied the claim itself, it is clear that the network is not shutting down and the viral claim is false.