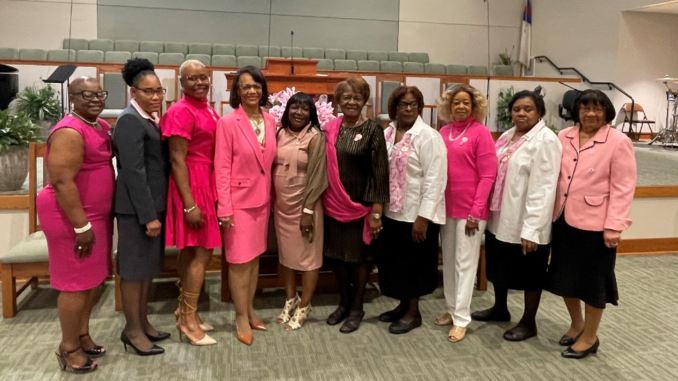 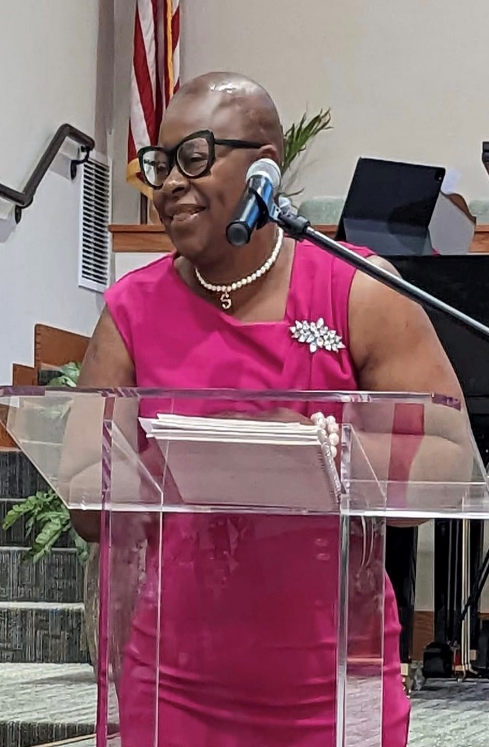 For many decades, the country has recognized October as National Breast Cancer Awareness Month, a time designated to educate the public about breast cancer and the importance of early detection. It is the most common cancer in women worldwide.

No matter who you are, breast cancer can touch your life or the life of someone you care about, and as with many churches, the College Hill family banded together and recognized the survivors of College Hill Breast Cancer. This annual recognition was led by Mission Circle #1. Men, women and children wore pink as a sign of solidarity and support.

On behalf of Circle #1, Denise Griffin reminded the congregation of the importance of early detection, including self-breast exams and scheduling regular mammograms. Survivors were given special recognition and gifts, after which deacoons Sandra Jenkin, a breast cancer survivor, gave testimony of her journey.

Jenkins got up and started singing Blessed Assurance. She then shared that she had been diagnosed with stage 3 breast cancer on July 28, 2018, and that it had spread to her lymph nodes.

She said, “I asked God to assign this restorative illness to my health resume. She wondered what she could have done wrong because she felt she had been obedient in her service to God, including helping others in need, tithing, and more. I felt like I was obeying God, helping others, paying my tithing, reading the scriptures, and praying.”

She heard him whisper to her, “Your illness has a purpose. It’s for my glory.” She quoted several scriptures that helped her during the trip, but when she started chemotherapy, the side effects were so bad that she couldn’t take care of herself and had to rely on her husband who was with her during her trip. used to be.

She said: “I decided to just give up. I didn’t see my life live like that. I wanted to give up, but my husband didn’t want me to give up.”

She again asked God, “Lord, why me?” She said he kept whispering in her mind phrases like “There is a purpose in your sickness and as mentioned in 1 Peter 5:7 Cast all your sorrows on me.”

In 2019, Jenkins had a double mastectomy in which lymph nodes were later removed only to find out that the cancer had moved to her liver.

She said, “I couldn’t imagine this happening to me.”

Again she heard his words: “Your suffering has a purpose.”

She continued, “I was so depressed, my mind was racing.” She said she would wake up crying at night. Her husband supported her through this frustration and after a while he called out what she described as reinforcements, which included her family coming in and helping him relieve for two weeks in a row.

She said she would go to sleep while hearing family members pray for her and wake up and her sisters and brothers praying over her. Jenkins found out during one of her doctor’s visits that she had previously had COVID before it was recognized in March, and her doctors said it was the source of much of her pain and depression.

She said: “My faith in God began to renounce again. Disbelief was my best friend.” She said, “I’ve asked the Lord to just take me out.” she said as I yelled at him. He whispered into her mind and said, ‘I am the mighty creator, I have you in the cradle of my arms. Your thoughts are not my thoughts. I am your Lord and Savior.”

In June 2020, Jenkins underwent liver surgery and was hospitalized alone due to COVID. Her husband could not be in the room with her.

In December 2020, Jenkins had to undergo more aggressive chemo because the cancer came back in her liver. She gained 25 pounds in a month and then she laughed and said, “I’ve only lost five pounds.”

She said she still had so much to do, but what got her through was the thoughts of her two children.

In 2021, she said the havoc was still in her body. She said she used reverse psychology on God. “If you want your child to die, let it be.” She said this time she heard Him say, “There is peace in your unbelief.”

Jenkins, with what appeared to be a glow on her face, concluded, “God is calling us to do the unthinkable. He will not send you where He has not seen you.”

Pastor Chaucy Jordan approached the podium as practically the entire church stood in ovation. He said, cast all your cares on the Lord, for He cares for us. No sermon was preached, for God spoke to the congregation through deaconess Sandra Jenkins.