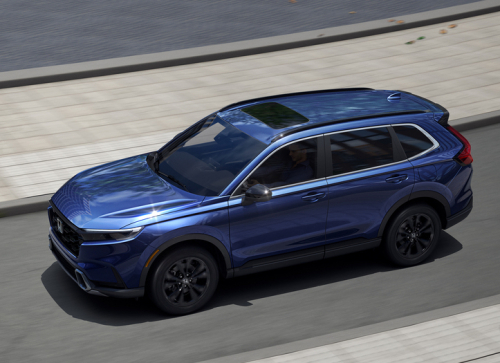 The Indiana Auto Plant (IAP) and East Liberty Auto Plant (ELP) in Ohio, which produced the previous CR-V Hybrid, will begin production of the 2023 CR-V Hybrid in the coming months. HCM is the world’s leading plant for the production of CR-V hybrids, the first time a hybrid has been built in Canada.

A key step in Honda’s electrification strategy, starting with the 2023 model year, approximately 50% of CR-V’s annual US sales will be powered by Honda’s new, more powerful, fourth-generation hybrid-electric twin-engine system.

This new configuration allows the use of a larger propulsion engine with higher torque. Combined system horsepower is 204 hp (3 hp increase, ISO net), while maximum traction motor torque rises to 247 lb-ft of torque (up to 15 lb-ft).

The hybrid-electric system is more refined at highway speeds and offers a towing capacity of up to 1,000 pounds for the first time. Linear Shift Control enhances the driving experience by mimicking the car’s speed-dependent rev feel associated with a conventional powertrain that shifts at full throttle. The new hybrid-electric system also significantly increases the continuous maximum speed, which rises from 136 mph to 115 mph.

The new CR-V is longer and wider with premium proportions and a significantly wider stance, further promoting Honda’s robust design direction for light trucks with a low horizontal beltline and a long, powerful front end. Honda’s most popular SUV supports its strong new look with a more fun-to-drive personality, more confident and refined dynamics, and more torque and capability.

All three CR-V plants in North America – HCM, IAP and ELP – worked closely with the Anna Engine Plant (AEP) and the Honda Transmission Plant in Ohio (TMP-O), which are responsible for the all-new powertrain for Honda’s latest electric vehicle.

With the sales plan of the new CR-V and Accord hybrid trims expected to represent approximately 50% of each model’s sales mix, and three different Honda plants in North America producing the new CR-V hybrid models, both AEP as TMP-O were needed to increase production volume for the new engine and hybrid system.

For AEP, this increase included more in-house production of engine components and an increase in local sourcing of parts previously supplied from Japan. For example, AEP now produces the camshaft for the engine in-house, requiring new equipment and a greater number of processes for employees. TMP-O employees will increase the production volume of the twin engine system by 300% (from 500 to 1500 units per day) within the first two to three months. 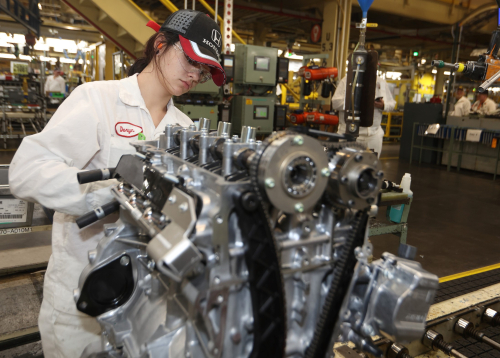 An employee at the Anna Engine Plant assembles the Atkinson cycle engine.

The engine also features a stiffer crankshaft and secondary balancer to reduce vibration and a full urethane hood, a first for Honda. Honda employees at AEP apply new lightweight fiber foam insulators, which are highly resistant to heat and vibration, directly on the engine in three different places, creating a quieter and more comfortable ride.

The fourth-generation dual-motor hybrid-electric system, made at TMP-O, has a new arrangement, switching from coaxial motors of the same size stacked on top of each other to a twin-motor system with parallel shafts with motors of different sizes which are mounted on the side. -on the side. The new system also includes new high and low speed lockup ratios for direct motor drive on the highway and in the city. 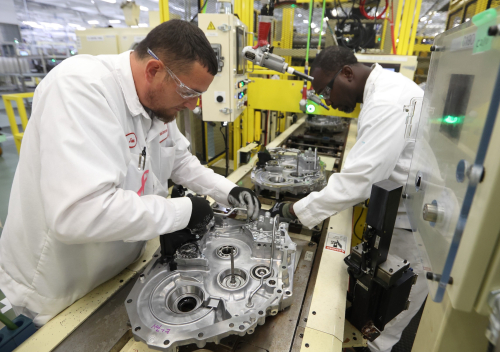 Overall, the new design improves responsiveness for a sportier driving feel and provides a more relaxed driving environment at highway speeds. It also provides a higher sustained top speed, improves fuel economy and allows for towing up to 1,000 pounds.

TMP-O is the leading plant for the production of the new twin engine system in North America. Combined with the increased volume production to meet Honda’s hybrid sales strategy, TMP-O employees were challenged with a greater number of parts – more than double the previous system – to be matured for mass production. The new system has more than 80 new parts sourced from local suppliers, compared to just over 20 parts with the outgoing system.

Smart automation has been applied at several locations to minimize the number of machines TMP-O has added to produce the new system, increasing efficiency and reducing the need for additional space and investment. For example, TMP-O’s machining department worked on making functions common and minimizing the need for exclusive tools. The assembly team then worked on applying flexible automation using common robots that can quickly change the end-of-the-arm tooling when running different models. This was a unique approach to what Honda plants in Japan and China were pursuing and paid off with greater flexibility and efficiency and more efficient use of floor space at the Ohio plant.

While installing new equipment and processes for the fourth-generation twin-engine hybrid-electric system, TMP-O also had to continue manufacturing the third-generation twin-engine system on the same production lines to meet the demand for the record sales of current CR-V and Accord hybrid models. Key strategies included using sub-assembly lines for the new shaft to keep the main assembly line processes the same, even with different and larger parts.

TMP-O employees also worked to reduce the time required for line adjustments by a month and a half, allowing the team to begin production trials earlier and continue production of the previous-generation twin-engine unit.

In total, Honda has invested nearly $24.6 billion in its North American manufacturing capabilities, more than $3.6 billion in the past five years alone. The company partners with nearly 800 original equipment suppliers in North America with cumulative parts purchases in excess of $535 billion.