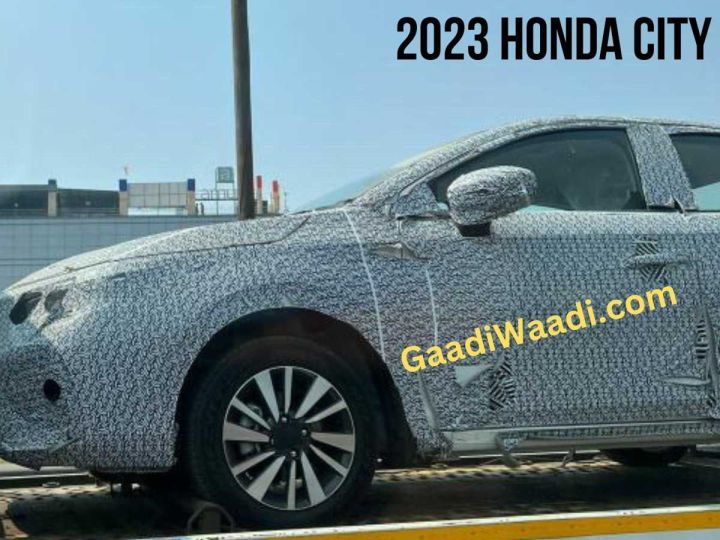 Facelifted Honda City’s launch is expected in 2023. Spotted with new alloy wheels and expected to undergo minor design changes. ADAS is probably not limited to the hybrid variant with facelift. Might not get a diesel engine as Honda plans to scrap it.

The facelifted Honda City has been spotted at our home base for the first time in pre-production form. This will be the first midlife update for the fifth-generation City, which has been on sale in India since 2020. We expect the redesigned sedan to go on sale in the country in early 2023.

The easiest giveaway that will let you know this is the facelifted Honda City is the new set of 12-spoke alloy wheels. There’s not much else to see because of the camouflage wrap, but if you look at previous Honda facelifts, you can expect it to be limited to a revised grille, redesigned bumpers and likely minor changes to the lighting signatures.

Inside, Honda could still tinker with the color scheme and upholstery of the cabin. The City is already a well-equipped car and we hope additions like a wireless phone charger and vented front seats are made to match the competition. The ADAS system, which is currently limited to the Hybrid variant, is also expected to be offered in the standard variants.

The facelifted Honda City may not get the 100-hp 1.5-litre diesel engine, as the automaker reportedly plans to scrap it due to poor sales and tighter emissions standards coming. So expect its 121-horsepower, 1.5-litre petrol engine to be the mainstay, along with the 126-horsepower, 1.5-litre hybrid powertrain. The non-hybrid version gets a six-speed manual transmission, while both power sources are mated to a CVT.

When launched in India, you can expect the facelifted Honda City to command a premium over the current model, priced from Rs 11.57 lakh (ex-showroom). It will renew its rivalry with the VW Virtus, Skoda Slavia, Maruti Suzuki Ciaz and the Hyundai Verna, which faces a generational change.