Emmerdale has revealed the first look at Liv and Faith’s heartbreaking joint funeral.

In Friday’s episode, viewers will see two horse-drawn carriages transporting Liv and Faith to the village as their relatives say goodbye.

Vinny is deeply moved when the funeral goes outside and he says that the whole village has come to say goodbye to his wife Liv and Faith Dingle. 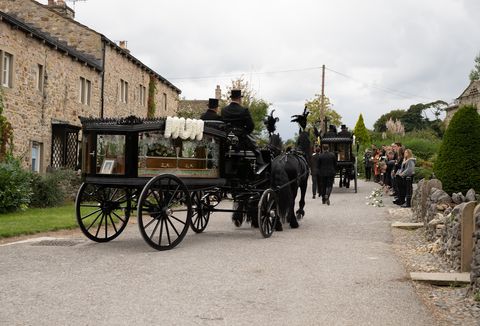 Emmerdale cast member Bradley Johnson, who plays Vinny Dingle, has talked about the amazing spectacle of seeing the entire cast filming together for these scenes.

“It was so emotional,” said the actor. “We were acting at the bottom of the village, so we didn’t see everyone queuing up on the main street. The director said to me, ‘Okay Bradley, I want you to walk around the corner and go looking up. see the whole cast and start throwing roses as the coffin goes by’.

“The first time I saw everyone there was when the camera rolled around. Because of Covid it’s a rare sight to see everyone there. It was really very emotional to have the coffins there and the hearses with their names on them. It was a really emotional day, but it has to look real and genuine.” 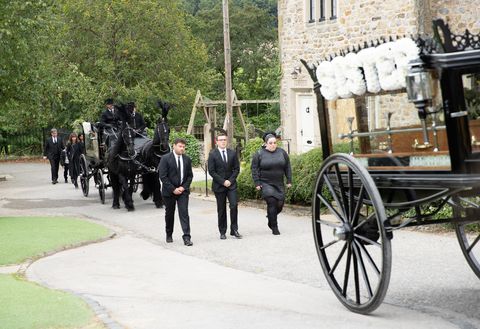 The Dingles remain in ruins for the funeral, while Chas is furious with sister-in-law Moira Dingle for not warning her or Cain about Faith’s plan to end her life until her final hours.

The family will have to put their differences aside to bury two of them. As previously mentioned, Faith decided to end her life on her own terms after being diagnosed with terminal cancer.

Liv was crushed by a caravan while trying to get to the Woolpack with husband Vinny during the storm. Police detective Harriet also died in the storm.

Emmerdale airs weeknights at 7.30pm on ITV and streams on the ITV Hub.

50 Years of Emmerdale: The Official Story of TV’s Most Iconic Country Drama

Request video message from select Emmerdale stars past and present

The Emmerdale Girls by Kerry Bell

Christmas in Emmerdale by Pamela Bell

Emmerdale at War by Pamela Bell

If the Cap Fits: My Rocky Road to Emmerdale by Steve Halliwell

Never judge a book by its cover by Lisa Riley

Emmerdale – The Dingles for richer for poorer [DVD]