A Wednesday night moment in Newcastle is sure to go down in Australian sports folklore. Donnell Wallam, who became only the third Indigenous woman to represent the Diamonds, lit up the arena as she scored one last gasp with a signature lay-up to seal the win over old rivals England with six seconds left on the clock.

The Australian bench rose as one, barely managing to stay behind the sidelines for the last few seconds before finally storming the field and encircling Wallam. Tears of joy flowed and the sisters in arms united to celebrate this extraordinary woman.

It was not the build-up Wallam had wanted or expected for her international debut. She certainly never sought the public scrutiny, or the comments of those for whom netball is still a contactless and ‘ladylike’ game from an archaic past. When she raised her concerns about a sponsorship deal with Hancock Prospecting, she did so within the safe confines of the Diamonds “sisterhood” – a culture built on standing side by side and respecting the voice of every player on the team, from the captain for those who have yet to take the field in the green and gold.

What has since exploded could have been prevented with more consultation and communication – the situation could have been played out behind closed doors, sparing Wallam the intense public pressure to make her debut amid an unwelcome media storm.

And yet she rose to the top and triumphed. In an incredibly tight game, Wallam scored eight goals from eight attempts in her 10 minutes on the pitch – including that final lay-up to win the game – and let go of the pressure that had built up over the past few weeks.

“Stay with the sport” is the battle cry of the status quo mongers, it echoed through Facebook comments and Twitter replies in this saga and is sickeningly repeated every time those in power feel the need to train athletes to it. remember that their job is just to entertain and not to talk. It’s an idea that dates back to the Roman Empire, nicely summed up in the famous phrase, “Give them bread and games and they’ll never revolt.”

In the minds of many, sportspeople are there to deliver the circuses—to deliver such glittering, exhilarating athletic feats to entertain the masses and distract them from challenging the status quo. When athletes get political, it’s unsettling. A native woman’s simplest request to be exempt from bearing the name of a man who made abhorrent comments about her culture and community turns into a storm spiraling out of control. 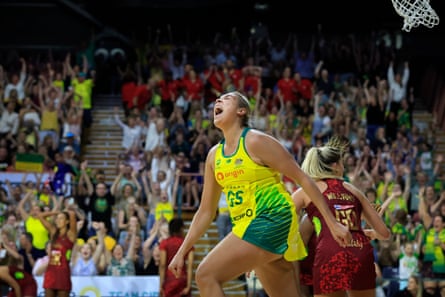 Let’s assume that sport is inherently political. Hancock’s prospect of investing in sports is a political act in itself, so the company’s statement that it “deems no need for sports organizations to be used as vehicles for social or political ends” is a reminder that for many people, rejecting politics in the sport only applies when it challenges powerful people and corporations.

Wallam’s performance in Newcastle, the roar of the crowd as she took the field, the outpouring of emotion from her “sisters” on her victory moment and the videos of the moment that graced story after story on Instagram showed that the “stick to sport The crowd is wrong, they are losing relevance, as evidenced by the way they desperately cling to this idea and flood social media, pushing their own political goals on anyone who dares to show solidarity with athletes who want to make change.

In those sensational 10 minutes, culminating in those joyous closing seconds, Wallam showed that it’s possible to stand up for what you believe in, to challenge – quietly or loudly – the leaders of your sport and still take to the field. go and all your best. While she’s never been asked to be the face of this issue and the pressure on her must have been almost unbearable, she proved to the world – and possibly herself – that there’s no need to stick with sports if you have the status. question quo and be at the top of your game at the same time. In sports there is often discussion about athletes as role models and Wallam proved to be one of the best. Young girls – and especially young indigenous girls – have seen the power of passion and faith, both on and off the field.