Uwamahoro Florence had to leave the village of Jomba eight months ago because of the conflict raging in the Kivu district of the Democratic Republic of Congo.

Florence’s family has not been able to feed themselves properly due to a lack of resources. And Uwimana Biraro Josephine could not find enough food for her three children.

But now Florence and Josephine and their families are among approximately 12,000 people who have recently received food and other supplies from the humanitarian organization Women of Faith with support from The Church of Jesus Christ of Latter-day Saints.

Florence said, ‘May our God bless them. Thanks to the help we received, we were able to meet our basic needs, including food and non-food.”

Josephine said the donations “gave us a smile and hope we lost for a while.”

A Women of Faith employee assesses the needs of people affected by conflict in the Kivu district of the Democratic Republic of Congo. Women of Faith, with support from the Church, provided food and supplies to thousands of people in August and September 2022.

The conflict has hit the eastern region of the Democratic Republic of the Congo. Eighty-seven percent of the displaced are staying with host families. The rest live in schools and churches, the church’s Africa Newsroom reported.

The donations went to the most vulnerable, including people with disabilities, the elderly, pregnant women, nursing mothers, widows and orphans.

Each aid kit contained 25kg bags of rice, beans and flour, as well as oil, salt, sugar, soap, clothes and a small amount of money for transportation. Distribution took place in multiple churches of different faiths in the area in August and September. People wait to be judged on donations from Women of Faith and the Church in the Democratic Republic of Congo. In August and September 2022, food and supplies were distributed to people from the Kivu region.

Gene. Sylvain Ekenge, humanitarian aid adviser to the military governor of Kivu, said: “We welcome this act of solidarity by Women of Faith and the Church of Jesus Christ of Latter-day Saints during this difficult period of war in this part of the Democratic Republic of the Congo.

“There is no greater gesture of love than to think of those who suffer. The national and provincial governments are fighting day and night to do everything possible to end this war. We thank the organization and its donor. We ask other people of good will to think of the displaced people who are still suffering in various locations.”

Ekenge assisted Nadine Banze, national coordinator of the Women of Faith organization, and Charles Shabani, a local Church representative from the city of Goma. Volunteers help food recipients transport the donated supplies. Thousands of people from Kivu, Democratic Republic of Congo, received help from Women of Faith and the Church in August and September 2022.

According to information on the Women of Faith website about the donations, Banze underlined the urgency to provide more assistance to those displaced by conflict and called on other benefactors to help.

Shabani also noted the importance of helping those in need, saying that the church follows God’s teachings to help others. 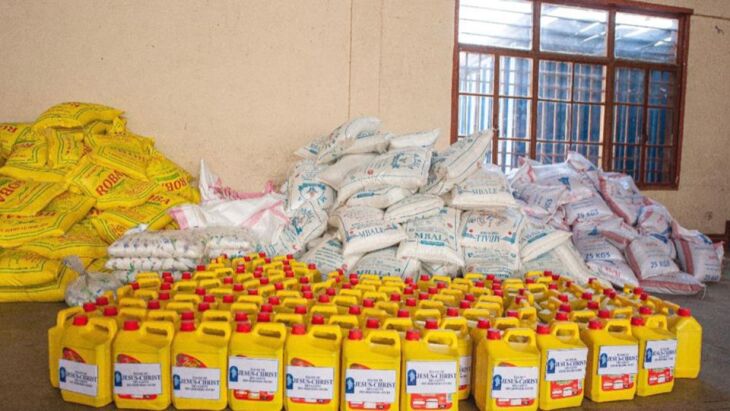 Rice, beans, oil, flour and other necessities for those in need in the Democratic Republic of Congo. The Church and Women of Faith teamed up in August and September 2022 to donate to the victims of conflict in the Kivu region.