T20 World Cup: Pakistani captain Babar Azam has been criticized by legends Wasim Akram and Waqar Younis for being selfish and insecure. Wasim Akram criticizes the captain and tells of old incidents. 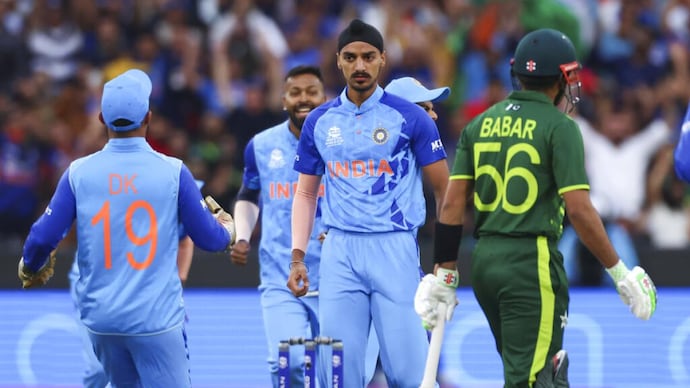 Babar Azam leaves after stepping out against India. (Courtesy of: AP)

By India Today Web Desk: Pakistani captain Babar Azam has been criticized by Pakistani legends for consistently occupying the opening spot despite poor form. Wasim Akram and Waqar Younis, two of the best fast bowlers to ever play cricket, have come up against the Pakistan captain after the team’s loss to Zimbabwe in the T20 World Cup.

Waqar called opening the easiest place to bat in T20 cricket, saying that Babar Azam and Mohammad Rizwan have not let Pakistan experiment on the opening position despite tinkering with everything else in the team. The former fast bowler believes this has left Pakistan’s opening reserves without a successor at a time when both batters consistently failed.

“The easiest place to hit in T20s is to open. You haven’t let anyone else open for the past two years. I’ve discussed this with Misbah before, why don’t you try something new? You tried it with bowling, but with batting we tried all the middle order experiments but the openers stayed the same and they hit 14-15 overs together,” Waqar said on the Pakistan sports show – The Pavillion.

“Sometimes, as captain and leader, you leave your spot and say, Haider, if you don’t succeed in the middle order, I’ll give you the easier spot (opening) and we’ve never tried that, and that’s why we suffer. And we also lose because of the way they score points. Becoming number 1 and number 2 (in the T20I ranking) is not a bad thing, the important thing is to win after you score those points,” Waqar added.

Waqar’s former bowling partner Wasim Akram added his points and revealed that he had the same issues with Babar Azam at Karachi Kings, where the batter refused to relinquish his position for the team despite a terrible form of form.

Both players accuse Babar of being selfish and insecure.

“The difference between being a captain and being a leader is the difference,” Waqar joked.

“By the way, I experienced this with Babar, at Karachi Kings, yes. In the team we had some bad phases and I kindly asked him once or twice, please come to number 3, we will try something else. Have (Martin) Guptill hit the top as he is an opener. And he (Babar) said I wouldn’t go down, you ask Sharjeel to hit on 3, and he (Sharjeel) is also a natural opener. And these little things that the captain does, the team feels too,” Wasim said of his time at Karachi Kings.

As things stand, Pakistan would need a miracle to reach the semi-finals of the tournament after losing head-to-head matches against India and Zimbabwe.