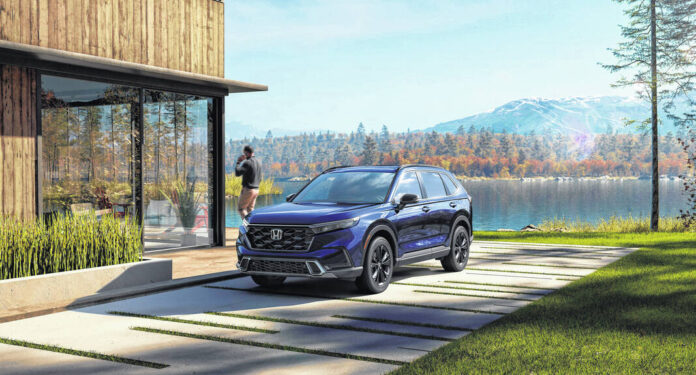 It is now forgotten that small SUVs were once called “cute utes,” implying that these vehicles were not true SUVs. However, since then they have become the most popular vehicles on the market due to their spacious interiors, compact dimensions, exceptional fuel economy and reasonable prices.

One such cute ute, the Honda CR-V is Honda’s most popular vehicle in 2021 and the fifth best-selling car in America. It is surpassed only by its arch-rival, the Toyota RAV4, and the big Chevrolet, Dodge and Ford pickups.

The sixth-generation Honda CR-V comes with a conventional petrol engine in EX and enthusiast EX-L trim, or as a gas-electric hybrid in Sport and top-end Sport Touring trim. All come with front-wheel or four-wheel drive and a continuously variable automatic transmission, except the Sport Touring, which gets four-wheel drive as standard.

One look at the new CR-V and it’s clear that this model is safe to be seen by people with Y chromosomes. The sixth-generation model has a simple, clean, square-jaw design that is the hallmark of the classic Honda design. Banned are the soft shapes and intricate muzzle that plagued the 2022 model. And if it looks bigger, it’s because it is, because it’s a total of 2.7 inches longer with a wheelbase that’s 1.6 inches longer and 0.4 inches wider.

The boxy styling and larger size means more cabin space. The new model features an instrument panel with honeycomb accents reminiscent of the smaller HR-V and Civic. The horizontal orientation and lower center console height give the interior a more airy feel than the claustrophobic 2022 model. But passengers in the front aren’t the only ones who get more space; Legroom in the rear seats is noticeably more generous. The seats are comfortable and supportive, even for long stretches behind the wheel.

The instrument cluster can be equipped with a 9-inch touchscreen, although a 7-inch infotainment touchscreen and digital instrument cluster are standard. Apple Car Play and Android Auto are also standard, while wireless charging is available. The infotainment system is easier to use than in the past, especially with the addition of a volume knob. But the software still doesn’t have a direct tuning function or button, so you have to repeatedly press the tuning buttons up or down to find the radio station you want.

When it’s time to tackle the travel, you’ll find that the EX and EX-L CR-Vs come with a 1.5-liter turbocharged four-cylinder engine rated at 190 horsepower and 179 pound-feet of torque. It delivers an EPA rating of 30 mpg in combined city/highway driving with front-wheel drive, 29 mpg with all-wheel drive. Sport and Sport Touring hybrids get a 2.0-litre four-cylinder engine mated to a traction motor to support the engine and a generator motor to charge the battery pack. It produces 204 horsepower and 247 pound-feet of torque, while returning an EPA rating of 40 mpg with front-wheel drive, 37 mpg with four-wheel drive.

Now that I’ve had a chance to drive the Sport Touring Hybrid, I can say it’s definitely the better drivetrain, as the conventional gas drivetrain lags behind its hybrid sibling in power and fuel economy. Because the CR-V is a conventional hybrid and not a plug-in hybrid, it cannot travel long distances on electricity alone. Honda decided not to design a plug-in because of the extra weight and cost of the powertrain.

Nevertheless, the hybrid provides ample power and fuel economy, delivering 36 mpg in combined driving, which is one mpg less than the EPA estimate. The CR-V lacked the instant, seamless torque typical of electrified powertrains, and switching to Sport driving mode makes it livelier, but not noticeably faster. Also, the engine gets extremely vocal when pressed hard. Notably, the Hyrbid lacks the indecisive power delivery typical of continuously variable transmissions, making it surprisingly enjoyable to drive. It is modestly athletic, with well-controlled body lean in corners and good shock absorption. The steering is perfect, which improves the driving feel. Still, some may want more power. Another 50 horsepower could transform this family dumper. May I suggest Honda produce a CR-V Si?

The 2023 Honda CR-V is a welcome upgrade with extra interior space, a more fuel-efficient powertrain and classic Honda aesthetic, making it more attractive than ever. While not as enjoyable to drive as Honda’s sportiest models, it demonstrates enough skill to be captivating without sacrificing usability.

Larry Printz is a South Florida motoring journalist. Readers can email him at: [email protected]