Most motorcycle manufacturers have a market niche that they are trying to fill. Suzuki builds affordable motorcycles; Kawasaki builds fast-looking motorcycles; Yamaha builds machines with an emphasis on reliability; and Honda builds motorcycles for motorists. 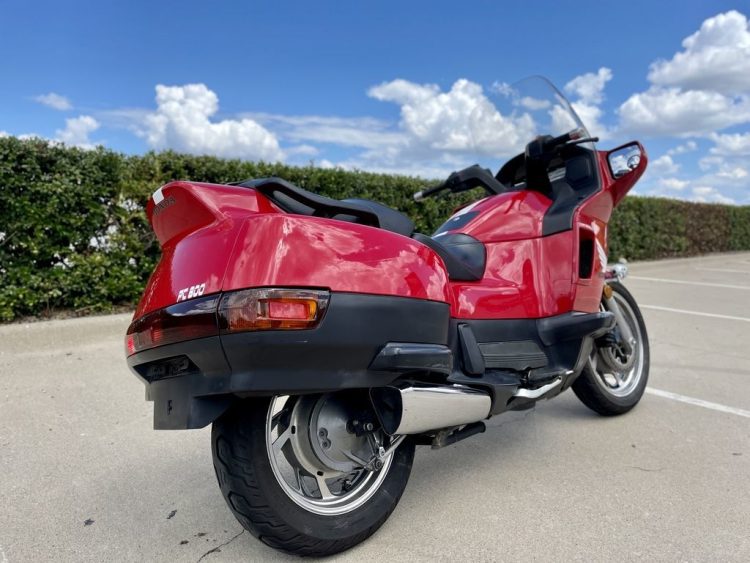 When the Pacific Coast entered the US market in 1989, it was initially conceived by Honda’s US branch, which had its own R&D department dedicated to bicycles for that market. Things have changed since then. Today, emerging markets are more important to Japanese manufacturers’ bottom line than satisfying the strange niches of the North American market. However, lucrative sales in the US made it worthwhile back then, in the heady, pompous days before 2008 brought the economy down.

When the US R&D team drafted the Pacific Coast project, they wanted to make a motorcycle to lure people away from cars. And why do people often prefer cars over motorcycles? Aside from safety concerns, there are two main reasons: luggage capacity and weather protection. 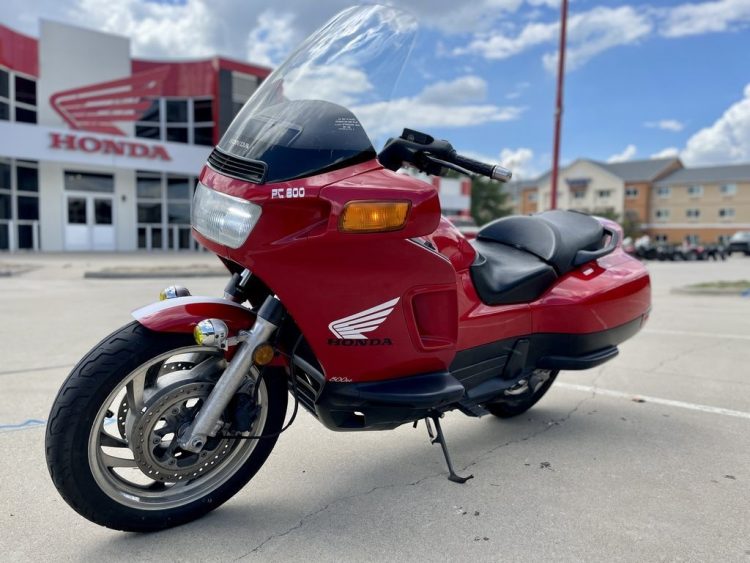 That’s what they’ve built into the Pacific coast, known as the PC800. The massive fairing blocked out a lot of wind, keeping the rider warm(er) and dry(er) than other bikes, even many touring-oriented machines. And on the back of the bike there was a huge… trunk? Unlike other touring bikes, which have separate panniers on either side of the machine, the PC800 had a large wraparound trunk that opened from the top, much like a trunk.

But even though it was highly unconventional, it worked. Motorcycle.com’s 1998 review of the bike put it this way:

The tribe rules. It can comfortably carry four plastic bags full of groceries, along with one bag of dog food. It fits two large helmets and two medium-sized sports bags. It’s waterproof. We drove the PC 800 through two pre-El Nino monsoons in Southern California with no water leaking into the trunk. And unlike side bags, things don’t want to fall out when you open them.

Maybe Honda was on to something then!

There were other similarities to cars, including an instrument panel that actually looked like a car dashboard, with plastic trim covering the steering wheel. Perhaps this was to make the bars of the PC800 look more like a handlebar?

The plastic body covered the entire bike, hiding all the mechanical sights. No look at the engine, rear suspension, whatever, just like a car. Honda built the tail lights right into the corners of that blown-up body, looking suspiciously like something you’d see on an ’80s import car. 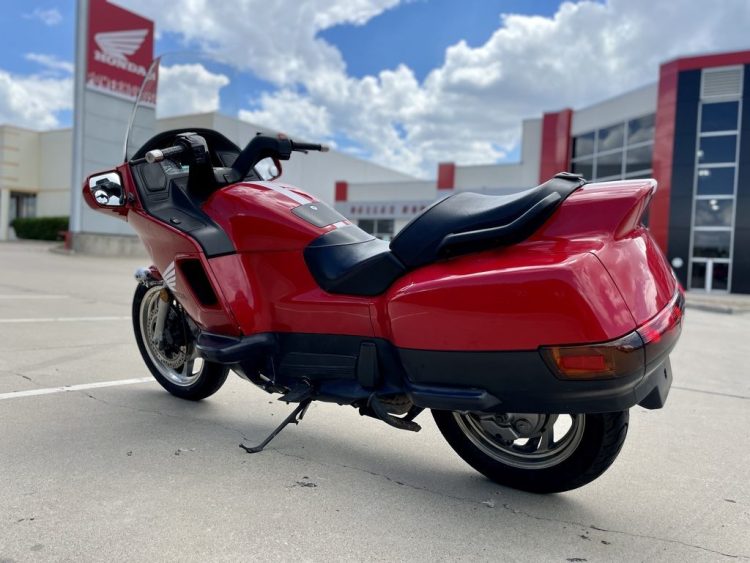 While all this was considered very revolutionary in the late 1980s, I think it should be pointed out that this had been tried before. If you look at a photo of an old Vincent Black Prince from the mid-1950s, you’ll see… a motorcycle with a V-twin engine and lots of bodywork. The fiberglass fairings were intended to make the bicycle more commuter-friendly and to draw buyers away from cars. Phil Vincent himself called the Black Prince a “two-wheeled Bentley.” So Honda certainly thought outside the box in 1989, but this was actually an old idea.

And like that Vincent Black Prince, the Honda PC800 didn’t achieve the results its designers wanted.

Like many of Honda’s out-of-the-box ideas, the PC800 was not a huge success (see also: DN01, NM4, etc.). But it wasn’t an abject failure either; it lasted from 1989 to 1998 in the US lineup, and in both years it has achieved cult status. Many hardcore motorcycle enthusiasts will confess to wanting to try one. That’s hardly the market Honda originally tried to capture, but that’s often the way things work. If it’s weird, only the weirdos will like it no matter how you tried to appeal to the normies.

Those crazies include a few ADs. You can see a thread on the forum here, with reviews from owners and former owners. And Justin Hughes, an inmate who also writes for the front page of the site, had his own video review. See below:

Look around YouTube at other reviews, or read enough ride reviews, and you generally get two impressions: First, the engine in the PC800 wasn’t exactly a thriller. The 45-degree V-twin was very similar to the engine Honda used for the ACE 750 cruisers of the era. Not terrible, but it pushed about 620 pounds of bike (all that extra plastic added up!).

Second, many riders noticed that this bike actually looked a lot like a car. That was of course the intention; Honda had made sure to include things like shaft drive and self-adjusting valves and cam chain so that users could exercise the same lack of maintenance concern as they would with a car. The actual riding was smooth, with that vibey motor carefully insulated with rubber mounts so the bike wouldn’t rattle and vibrate.

Do you want to buy one?

If you decide you must have one of these eccentric bikes for yourself, you’re in luck. Dallas Honda has one for sale…for $5,999. Wait what? It’s a ’98 model, with 51,000 miles on it, and $6k sounds a bit pricey. But look at the pictures – this machine is super clean. If you want to burn a lot of money, I think there are the worst ways. The ad says ‘Make an offer’ so chances are you’ll get it for a few C notes less if you come with cash in hand.