Given inflation and despite slowing growth, the Reserve Bank of India has quadrupled the short-term bond or repo rate from 9/30 to 5.4%.

While India will face headwinds in the near term, India has significant potential.

With a population soon to surpass China’s, India has the advantage of having one of the youngest populations in the world with an average age of 29 years.

Given its demographics and GDP per capita, India has a much greater growth potential than developed countries.

India’s strong ties to the United States also contribute to the country’s growth. The close ties have the potential for increased trade and foreign direct investment in India. In terms of trade between the United States and India, bilateral trade in goods and services between the US and India increased from USD 120.6 billion in 2020 to USD 159.1 billion in 2021. As India’s economy continues to grow, trade can also grow and benefit the citizens of both countries.

With more foreign direct investment, India’s economy may grow even faster, as foreign companies, including US companies, often bring in the expertise, in addition to capital, that India needs to realize its full potential. 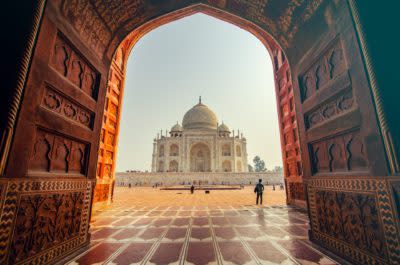 Photo by Sylwia Bartyzel on Unsplash

Kotak Mahindra Bank is an India-based bank that offers a range of banking services such as retail banking, treasury bills, corporate banking and more.

For the June-September quarter, Kotak Mahindra Bank reported a 27% year-over-year profit increase to 25.8 billion Indian rupees ($313 million) compared to analyst estimates of 23.68 billion rupees. One of the reasons for the jump is the central bank’s rate hikes, which could help net interest income. Another reason is that Kotak Mahindra Bank’s gross bad loans as a percentage of total loans fell to 2.08% at the end of September, from 2.24% at the end of the previous quarter in June. Although an interest rate that is too high would not be good for Kotak Mahindra Bank’s profits, the bank is doing well given the current economic conditions. As of October 27, Kotak Mahindra Bank has a market cap of $44.96 billion, making it 15th on our list of 15 largest Indian companies by market capitalization.

Adani Enterprises is a holding company that owns businesses ranging from mining, oil and gas exploration to ports, power generation and solar. Although US markets fell sharply in 2022, Adani Enterprises shares have nearly doubled since the start of the year. As a result, Adani Enterprises has a market cap of just over $46 billion, making it number 13 on our list of 15 largest Indian companies by market capitalization.

Adani Total Gas produces and distributes natural gas in India. The company also sells industrial and compressed natural gas to the country’s commercial, residential and transportation sectors. While India aims to have net zero carbon emissions by 2070, natural gas is cleaner than coal and India aims to increase its contribution to the country’s energy mix to 15% by 2030, from 6.2% today. If that happens, Adani Total Gas could benefit from increased demand in the medium term if it maintains its existing market share. As of October 27, Adani Total Gas has a market cap of $46.9 billion.

Bajaj Finance is an India-based non-bank financial company that provides both consumer loans and loans to small and medium-sized enterprises. In terms of its strategy for the future, Bajaj Finance managing director Rajeev Jain commented on a earnings call,

What I also understand from shareholders, our view is that we are focused on building from financial services to payment and financial business, and that we will remain a non-bank for the next 2-3 years and comply with all banking-like regulations. We want to reach 100 million customer franchise in the next five years.

With its market capitalization according to companiesmarketcap.com, Bajaj Finance is also one of the most valuable Indian companies in the world.

ITC is an India-based holding company with companies active in the FMCG, Hotels, Paperboards, Paper and Packaging, as well as the Agri sectors. While the US stock market and many other stock markets around the world have fallen in 2022, ITC’s shares have risen more than 50% so far. As a result of the increase, ITC has a market cap of over $52 billion as of October 27, placing it 10th on our list of 15 largest Indian companies by market capitalization.

Click to read on and check out the 5 largest Indian companies by market cap.